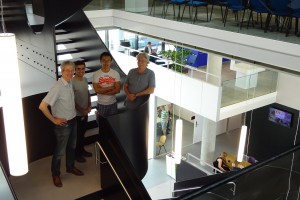 Participation in large European projects not only gives ILI first hand insights in the system architecture of future lighting control systems, it also is a good way transfer insights and knowledge to many industrial partners. This was particularly rewarding in the large EnLight project, with partners ranging from device suppliers, software and integration specialists to system developers. This project has been awarded with the ENIAC Innovation Award.

The EU applauded how EnLight was exemplary in bringing together key actors in a project of significant size (more than 41M€ R&D investment by 27 partners) to achieve results of genuinely high value to the partners. It highlights the importance of semiconductor technology as a core European competence, which fully delivers on its promise of innovation when taken up by leading actors along the full value chain.

In EnLight, the Signal Processing Systems group at TU/e EE cooperated closely with for instance Philips and NXP. The project had three technical objectives namely the optimization of LED lighting modules, the design of future luminaires and the use of new, intelligent lighting systems. As a result, the energy savings in office applications could be shown at 44% compared to LED retrofit and standard controlled lighting systems. The energy savings in hospitality could nearly be doubled and ended up at a figure of 81% energy reduction by using new luminary designs with intelligent controls. This motivated the journal LED-Professional to devote a full special issue to this project.

The EnLight project has given the TU/e PhD candidates Xin Wang and Amir Jalalirad an excellent view of the true problems in the future lighting installations. During the project they refined the initial specification of the rules and implemented the engine on the NXP Jennic platform. The insights they obtained in the requirements of lighting systems were augmented by the intelligent control implemented in the EnLight demonstrations in Oulu (VTT, Finland), Munich (Osram, Germany), and Eindhoven (Philips, The Netherlands).
Scientific Directions
Now in the final year of their PhD project, with the EnLight experience behind them, Xin and Amir are focusing on the next wave of innovation, particularly from the insights of data analytics and optimized control.

In EnLight, the industry has set the stage for an architecture that allows intelligent and energy saving applications to be executed. Prof. Jean-Paul Linnartz, advisor of the two PhD candidates in EnLight, sees the harmonization of a rule engine as a good step forward in EnLight. Particularly the option to adapt rules as the systems learns about its users and its environments enables further innovation towards self-adapting systems. “But in the long run, we may have to extent if-then-else rules with probabilistic optimizations”. “Practical systems will never have absolute knowledge about what human users are preferring. Hence these systems should optimize light setting according to a cost function, rather than make hard choices”. In some of his recent papers Xin Wang has worked this out by modelling of human satisfaction and, for instance, energy consumption in mathematical models. For the human experience that required the inclusion of uncertainty. This avoids to a large extent the annoying wrong decisions that current automatic systems make when sensors are not working perfectly.

Dr. Tjalling Tjalkens, also coaching the PhD candidates at the faculty of Electrical Engineering sees a clear connection between machine learning, information theory and future lighting control. Yet we have to advance the scientific state-of-art, because in well-functioning lighting control, the number of human interventions should be very minimal. Hence such system have only few learning opportunities, much less than academic machine learning algorithms typically require.