Radio with an instinct 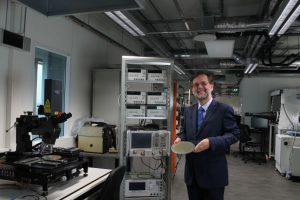 Humans have been exploring the world from the depths of the oceans to the edges of the universe. Yet many environments remain inaccessible, even to modern cutting-edge technology. Therefore problems like exploring the status of waste water under the Fukushima reactor, or discover suitable sites for underground CO2 storage remain unsolved.

Phoenix attempts to explore inaccessible environments with physical agents, say small radio nodes, that are extremely limited in size and resources, and can operate without direct control over software and hardware. Phoenix starts with processing a user question, then assesses available knowledge and initiates an evolutionary process involving two nested generational loops. In the outer loop Phoenix develops, deploys and retrieves physical agents capable of penetrating the inaccessible environment and gathering information. Based on this knowledge, a model of the unknown environment is developed and evaluated. This model is refined in the inner loop, where environmental models and abstract representations of the physical agents (virtual agents) co-evolve in a virtual world until an improved generation of physical agents is ready for deployment. The goal of this co-evolution is to maximize the information captured about the unknown environment by progressively optimized agents.