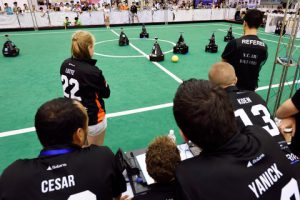 The TU Eindhoven soccer robot team will be defending its world title from 27 to 30 July at the RoboCup in Nagoya, Japan.

Yet this is not only about games and sports competition, it is also pushing the frontiers of innovation in autonomous driving and medical surgery.
Radio4Brainport interviews a big fan of the Robocup and the Tech United team from Eindhoven: Prof. Maarten Steinbuch.

RoboCup is the world championschip for intelligent robots in different disciplines, with almost 4000 participants from 40 countries. If Tech United gets to the final, it will be the tenth time in a row. And if the fully autonomous Eindhoven soccer robots win, it will be their fourth world title. In the ‘help-at-home’ category, the TU/e team hopes its robots will be able to bring home a first world title after second and third places at previous tournaments.